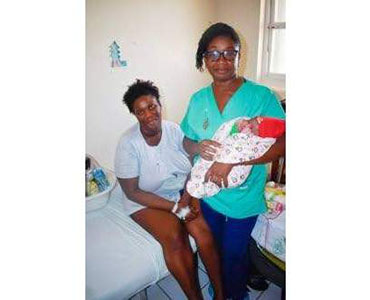 A boy was the first baby born on New Year's Day at the Annotto Bay Hospital in St Mary.

The mother, Sheika Grant, 31, of Cane Heap also in St Mary South Eastern, delivered the hospital's first Jamaican citizen of the year at the institution around 11:20 am. The infant weighed eight pounds, five ounces and measured 20.07 inches long.

Grant, now a mother of six, said that she had been eagerly awaiting the birth of her son, adding that she was â€œexcitedâ€ and â€œhappyâ€ that he had arrived safely and is in good health.

The baby, who had not yet been named shortly after health officials visited her, was delivered by midwife Maxine Lecky, who said she too was thrilled at having delivered the hospital's first baby in a new year and a new decade, and that the birth occurred with no complications. Annually, eighty per cent of all recorded births in the parish of St Mary occur inside the maternity ward at the Annotto Bay Hospital.

Chief Executive Officer of the hospital, Dennis Morgan, visited the mother and congratulated her on the birth. â€œI am truly happy for the parents, and extremely proud of the Annotto Bay Hospital's midwife and the rest of the medical team on the safe delivery of one the first babies born in the world in this new year and at the dawn of a new decade,â€ said Morgan. â€œThis is truly a momentous occasion for which we all should celebrate,â€ he added.

To commemorate the auspicious birth, the mother was showered with gifts from several civic and commercial entities, including the Kiwanis Club of Buff Bay; the Regional Kiwanis Group of St Ann, St Mary, and Portland; and Kirk Distributors Ltd.

The hospital said two days ago that the mother and child were doing â€œamazingly wellâ€.